Imagine examining a new-born baby. You take a long, long look, flick your eyes to the adoring, but probably nervous, mum or dad, pick up their bundle of joy, and say, 'You've a fine, healthy baby here, and it's going to grow up into something special, something you can be proud of, but at this minute...well, it is a bit funny looking.'

That's exactly what I feel I'm doing, hovering over the Send key, just before I send a developmentally-edited manuscript back to an author.  I can imagine how s/he is feeling, simply because I experience something similar whilst waiting for an initial response to my work.  Will I have got it right? Have I adequately tuned in to the story she is attempting to write? Will he punch the air and thank the patron saint of editors for a job well done? Above all, will the author be imbibed with a brand new enthusiasm for the work-in-progress?

I think (hope) I get it right, more or less, a lot of the time - unless the authors I work with are all too polite to say what they really think. I've only once had someone say, 'You make one or two good points but I'm going to (self) publish it as it is anyway.' (They did.)

As a writer as well as an editor, I do try very hard to remember what it's like to be on the receiving end of criticism, however constructive. I join writing classes or courses, competitions, too, if the opportunity arises - and the fees are manageable (I intend to write a lot more about this when I've got my words in order)  - and Twitter contests are a great way to hone my pitch. This month, however, it went up to a new level, and I received some great editorial feedback from two very different sources.i

I entered a Killer Reads novel competition, and was asked for the rest of the book. 'Ah,' I admitted, 'It isn't written-' Send it when it is, they said '-but (being shameless) here's one I prepared earlier.' Being a different genre, it got passed on to Harper Impulse. I read their guidelines, realised it was a totally inappropriate submission and thought, that's that. It wasn't. I got the anticipated rejection - with a well-considered, in-depth, hugely positive critique. (I gushed embarrassingly, albeit sincerely, over editorial director, Charlotte Ledger)

Buoyed up, I used the bit of money my late granny left me (to 'do something for your writing') to ask advice of Inkwell Writers about the same novel. Again, I got a thoughtful, detailed report, 'tuned-in' report.

However, the point - yes, there is one - is that while the two critiques agreed on much that I'm going to let myself be proud of, they also disagreed totally on two fundamental plot/structural points: one said (I'm paraphrasing, they spoke much more elegantly) the dual narrative was integral, the other that I should lose the second voice. One enjoyed the cast of characters, the other said ditch half of them.

The moral of the story: editing, at least of the developmental, structural sort, isn't an exact science.  Writing isn't an exact science. Find an editor who's tuned in to what you want to do, rather than what they think you should do. Get an honest opinion from someone who believes in your work, then trust your own instinct.  (And always be kind to each other). 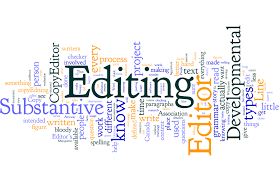