I found television over the summer. It’s not that we don’t have one at home, we do, but it’s inherited, from The Old Days, and the size of a postage stamp. Squinting through each section of my multi-focal glasses isn’t really worth it (except for Masterchef Australia, the best programme ever).

Although by TV, I really mean Netflix, and suddenly I understand those mysterious people who disappear into box sets instead of reading a book. I’m not sure whether it’s best or worst of all, that I now realise I could upgrade my Kindle and get a nifty Fire one on which I could do both.

Anyway, my moving picture gazing is all in the name of research: I’m drawing a correlation between big screen-watching and the way that novels are written.

I’ve said it many times before, but I love editing, and if pushed I’d probably pick the earlier stages – manuscript assessment and development or structural editing – as my favourites. And over the last year or so, I’ve noticed a distinct trend in several of the novels I’ve been working on.* Each of the authors has put together (the makings of) a good story, strong on plot, with realistic characters and that all-important hook.

But they don’t read like traditional novels. There is none of the flow, no sense of time ebbing and flowing, no mix of summary and scene – where some parts are deliberately glossed over and others actively played out, and very little time inside the head of the protagonist.

What these authors have done – consciously in some cases, not in others – is take a TV/film format and write it down. They’ve written in scenes, action scenes; no transitions; no downtime; little backstory; minimal description. They’re not head-hopping, but they are flipping between characters, settings and events in short, sharp bursts, and showing – painting a picture – rather than using their words to tell a story. (And whilst novelists are frequently told to show not tell, telling is not bad, it has an important place. in moderation). 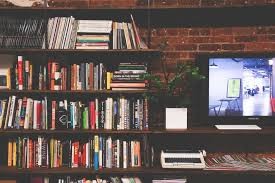 I’ve worked hard to be objective. After all, something that doesn’t follow the traditional ‘rules’ can be excellent, and it’s my job to discover what the author is attempting to do, and help them succeed. Maybe this way of writing is The Next Big Thing? Maybe it is a deliberate method, like a novella-in- flash or a novel in scenes, Elizabeth Strout style (see her Olive Kitteridge) or an episodic newspaper instalment from Dickens or Alexander McCall Smith.

But no. On speaking to each author, none of them wanted to write a novel that read like a TV audio description-plus, whether or not they were aware they had. What did become apparent is that all are film buffs, into video gaming, and this was their first time at drafting a novel.

As a result, we’ve taken their strong drafts – and that’s the point, these weren’t first get-it-down-in-any-way-possible drafts, they were polished – and we’ve ‘novelised’ them. In my opinion (and theirs, unless they’re being polite!) we’ve made much stronger books. Of the five authors I have in mind, one has gained an agent, one a publisher, and two have self-published and are selling.

Would they have done so well if we’d simply line and copy-edited their original formats? After all, in no case did we really alter the story itself, just the way of telling it… And for those of you reading this expecting a punchline, I’m sorry but I honestly don’t know! It’s something I’ve pondered a lot as I’ve had my Netflix summer and continued working, with these, and with other authors who are writing the more traditional way.

All I can say is, I’ll be interested to see whether great, really well-written, TV-like novels do start to find their place in publishing, or will TV/film and novels remain two very distinct media.

*The bit of me that’s still an epidemiologist has to point out that this is not a systemic, randomised, official or in any other way controlled, study. Call it an observation.

The Invisible Women
A Life of Crime (Writing)