This month, several new books have joined the teetering pile on my ‘books I’ve been lucky enough to have had a vague something to do with’ shelf. Two collections, a short story, and a novel – something for any time, place and mood, in fact!

Do follow the links for more information on the books and the authors; all come highly recommended: 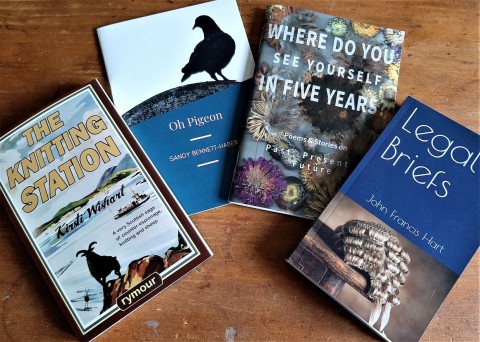 Where Do You See Yourself In Five Years? Poems & Stories on Past, Present and Future

An anthology of new work by emerging writers from across the UK and beyond, WHERE DO YOU SEE YOURSELF IN FIVE YEARS? was created during the global COVID19 pandemic of 2020, a year that challenged our normal sense of time, the present, and the future. In this book, 29 writers and poets respond to the theme of 'past, present and future'.

OUT NOW: Where Do You See Yourself In Five Years Poems & | Etsy

Short story booklet. A story of three people on a stormy day in a shop on a city street. A frail pigeon brings them together to contemplate what it means to be displaced. £1.00 from each sale goes to refugee projects.

Hannah Richards, former code-breaker at Bletchley Park and gay before the time of liberation, is recovering from a mind broken by the strain of secrecy. With the Cuban missile crisis looming, she’s one of a group of patients taken to Tharn, an island famed for its fantastic knitwear. Supervised by experimental psychologist Doctor Frederickson, their home will be the Knitting Factory, a Studio 54 for the Highlands, run by the mysterious Madame Jeanne. The Madame’s daring concepts in knitwear have brought her into conflict with the native knitters, most notably the formidable Mrs Montgomery. Negotiating the tensions of the island Hannah is convinced Tharn is about to be invaded by Russian agents. Not knowing who to trust, least of all herself, she confronts technicolour Highlanders and mushroom-induced hallucinations, assisted by East End starlet, Elsie Brixton and a psychotic sheep

Foot of the Walk (rymour.co.uk)

A collection of short stories, linked by law, and inspired by the colourful lawyers who practised in Glasgow Sheriff Court during the Sixties and the characters for whom they appeared.