A Life of Crime (Writing)

From Killer Women to Bloody Scotland, September has seen me pitch – literally – into a flurry of crime…I’ve been grilled by a panel, defended myself in public, put my statement down on paper, and got my mugshot up there with the best of them.

The confession? Of course, I’m talking about the writing of crime, not actually perpetrating it. And even then, ‘crime’ might be stretching it a bit, I’m probably sheltering more under the broad label of psychological thriller.

I’ve always loved crime novels, from classic Agatha Christie to contemporary cosies from Lynn Cahoon, and all the local (Scotland) writers in between. The same goes for psychological suspense. But had I ever seen myself writing either? No, not really.

The whole genre has always been a mystery (no pun intended) to me. How does an author do it? Painstaking planning and water-tight plotting; clues, red herrings and hints; authentic details of murder and mayhem, and that’s without the obligatory ‘twist you won’t see coming’ threatened on many an otherwise promising cover. The writer in me is daunted.

Not only that, but it’s one of the most popular and competitive book markets, for traditional and self-publishing markets alike. There’s so much good stuff…and – here, the editor in me comes to the fore – some that could be so much better. That, of course, is the trap I’d fear falling into most of all.

But then, that same editing hat came in useful. A couple of ‘my’ authors happened to have  very different psych-y/crime-y novels accepted for publication. I watched the process from the sidelines, as their in-house editors encouraged them to change the inciting incident, to change the motive, to change the killer… Something gave a little click and I realised crime writing was ordinary writing – with a crime at the centre.

So, when, a few months ago, I HAD AN IDEA (they don’t come very often), I wrote a mini Twitter pitch. It got noticed – and by real literary agents, not just the friends I’d tagged so they would ‘Like’ it! I worked it into a synopsis and a few chapters, and got some lovely support from the Killer Women scheme (thank you, especially, Emma Kavanagh). On a roll, I sent a 100 word teaser off to Bloody Scotland for their Pitch Perfect event…

…And somehow got invited to pitch. At the festival. In public. In front of a panel of editors and agents. In three minutes. With three more minutes – still public – feedback.

It was great: the other ‘pitchers’ were lovely (and had excellent ideas, cue vast imposter syndrome!) the panel was insightful, the audience engaging and forgiving. I’m even able to name-drop, having post event chats with author, Mari Hannah, and Karen Robinson of The Sunday Times.

Okay, it doesn’t make me a crime writer. But I’m dabbling. I’m powering on through a first draft of an idea I like a lot and find just a little creepy. It’s something new, it’s a puzzle and it’s fun – and it’s taking my mind off the fact that I’ve also finally got round to querying the finished novel. 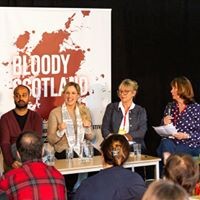