All About the (Writing) People

October’s writing life has probably been as ‘normal’ as it’s going to get in the foreseeable future. And so much so, it feels hectic; full of ends and beginnings.

Resuming ‘face-to-face’ writing groups has been a real highlight, albeit within the confines of COVID rules: seating a small group – distantly –  n a room the size of an aircraft hanger; bellowing at each other through masks (who would have thought we depended to lip reading so much to hear?) and jumping up at regular intervals to read the carbon dioxide monitors, opening indoors and doors accordingly. Worth it? Of course. Meeting up and keeping safe is priceless.

We hadn’t been slacking in the online department either, though. I received a very delayed gift from one such group – made by a very talented member – a keepsake box, decorated with prompts from writing exercises and names of the authors (see the photo!) So thank you very much, Amanda and OxPen. 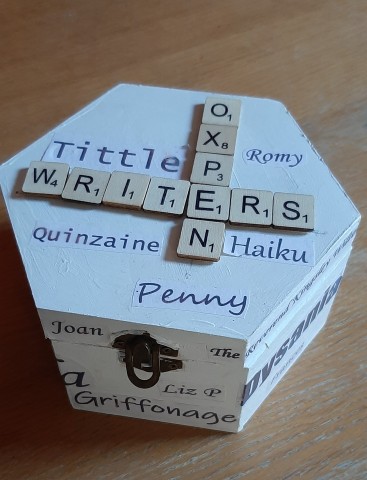 Over at the other side of the city, we’re finally – finally! – ready to start down the publishing route of our collaborative novel, Entitled. The book is written and edited, the proofread is on, and we have our publisher. It’s all thanks to funding from the National Lottery’s Awards For All, granted long before lockdown – which makes it the perfect project now we’re back together. It’s an exciting time, choosing cover designs, and planning a launch. More on this at a later time, when I can show you the cover and the blurb. Well done, Gilmerton!

A short course in the Old Town has resulted in the finishing touches to the Crannie Creatives’ Zine, and on a personal level I’ve done my edits for The Finally Tree, my contribution to The People’s City anthology – the Edinburgh OneCity Trust initiative, published by Birlinn in February.

But amongst the familiar, there’s been a learning curve second to none. I’ve taken up a role as a writing tutor (grandly known as an Associate Lecturer) with the Open University, and whilst the work is great, the people are even better – the technology, or rather my understanding of it, has led to me almost spontaneously combust on several occasions…

It’s great to be back amongst the writing people – as well as seeing them on screen!

Bhola's Children in 2021
Friends, Writers, and their Books